The Goodies on Tour

While the Goodies contemplated mounting a stage show in the 1970s, their live appearances in those days were limited to charity shows (at which they performed some of their songs) or promotional appearances for their books & records. Therefore, the first ever Goodies live show actually took place in Australia in March 2005, when they were invited to appear at the Big Laugh Comedy Festival in Sydney, Australia. 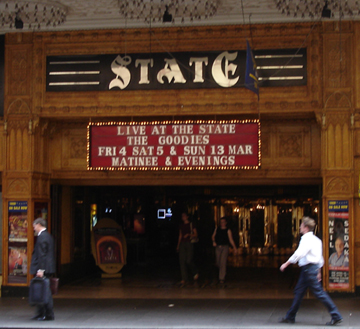 Due to the huge success of those dates a second leg of the tour (with Tim & Graeme returning to Australia and Bill participating "virtually" via video, due to his work commitments in the UK) visited 17 cities in November-December 2005.

In 2006 the show (now renamed The Goodies Still Rule OK!) was brought to the UK, with dates at the Edinburgh Fringe and the Paramount Brighton Comedy Festival. A National Tour consisting of another 23 performances followed in March-April 2007.

TIm & Graeme (and virtual Bill) returned to Australia in October 2009 for a new version of the show, now titles The Goodies - Before, During & After,  for five shows in Sydney & Parramatta as part of the World's Funniest Island comedy festival.  These shows, which were hosted by The Chaser's Andrew Hansen, were in an interview format and featured different Goodies clips than the 2005-2007 dates, most notably the long-missing "sex test" scene from the episode The Commonwealth Games (which at that time had recently been recovered from the Australian government's archive).

Bill Oddie returned to Australia in 2013 for a short tour titled Bill Oddie - An Oldie but a Goodie which consisted of five shows from 20-27 June in which he reminisced about his complete career to date, including his comedy career along with his work in wildlife/nature programs.

Information about the Goodies' tours can be found on the following pages:

* The Goodies on Tour in Australia: dates and venues for the March & November/December 2005 Australian tours plus the 2009 World's Funniest Island dates and Bill Oddie's June 2013 An Oldie but a Goodie tour.

* The Goodies on Tour in the UK: details about the shows at the 2006 Edinburgh Fringe Festival, the 2006 Paramount Brighton Comedy Festival, and the March-April 2007 UK National Tour.

* Goodies Tours Merchandise: a guide to the official merchandise sold at or in conjunction with the Australian and UK tours as well as Bill Oddie's 2013 An Oldie but a Goodie Tour.